Firefox OS – The Web is the Platform

This past Monday I gave a presentation at the Mobile Monday Detroit meeting about Firefox OS. Thanks to some great screen recording software by TechSmith, I also recorded it 🙂

I’ve also made the slides available online for those who just want to read (press ‘s’ on your keyboard to see my speaker notes, you may have to allow pop-ups).

Mobile Monday Detroit is a monthly meetup that gets people together to talk about activity in the mobile space. Many topics cover Android and iOS, so it was really cool to snag a spot on the podium and give a talk about one of the ‘alternative’ operating systems. Also presenting this week was Randy Nunez from Ford who gave a talk about the various open source mobile operating systems and Chris Peplin from Ford who talked about the Open XC API for cars that Ford is working on.

If you live in southeast Michigan you should try to make it out to one of the meetings. More information can be found at the Mobile Monday Detroit Meetup page.

If you haven’t heard about Firefox OS before, or would like to learn more about it, you should come to this month’s Mobile Monday Detroit. I’ll be presenting at the meeting about Mozilla’s motivations for Firefox OS, how we’re opening up mobile hardware, and roadmap for the future.

It has been estimated that in the next 10 years, five billion people will gain access to the internet. Many of these people will be accessing the internet using mobile connection exclusively.

One of the main goals of Firefox OS is to provide a device to people that brings with it the full web as compared to the limited subset of the web that is currently accessible on more basic feature phones. This also means providing web applications better access to hardware, so application developers can provide rich environments comparable to that of other mobile phone operating systems.

As we build these hardware APIs, we have been working very hard to standardize them and push for other browsers to adopt them. You can follow along with the progress of the WebAPI project by visiting our wiki. All of the FirefoxOS roadmaps, feature lists, etc can all be viewed online. This project really defines openness 🙂 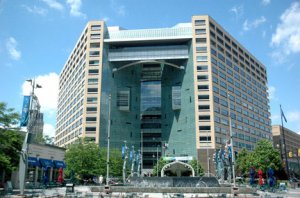 Mobile Monday Detroit is hosted at Compuware’s headquarters in downtown Detroit, at One Campus Martius. The event will start at 5:30pm and run until 8pm. Food and drinks will be provided. Please RSVP (it’s free!) if you plan on attending so the organizers will have a good idea of how much food to order.

Randy Nunez from Ford will also provide information on a variety of additional open source mobile OS platforms that are catching the attention of the developer community.

I’m excited to announce that I will be presenting at MobiDevDay Detroit on May 4th on the topic of Firefox OS.

This talk will briefly cover the motivations of FirefoxOS and then dive in to the new technology and APIs that are being opened up to developers who are looking to create apps for FirefoxOS.

MobiDevDay Detroit 2013 will be held at the Cobo Conference Center on May 4th.

Breakfast, Lunch and Free Parking will be provided.

Register today for the conference before it sells out. I’ll share more details about my talk as the date gets closer.

You are currently browsing entries tagged with detroit at JAWS.