The fresh and furiously fast Firefox

One of the less covered parts of this week’s Firefox release is high attention that was placed on the performance of the redesign of the tab shape.

The new Firefox introduces a new tab shape that is consistent with Firefox for Android, FirefoxOS, Thunderbird, as well as the web properties of Mozilla.

As the Firefox team was implementing this new design, performance was a key metric that was measured and focused on. We wanted to not only bring a beautiful design to users, but one that matched the new sleek shape with an equally speedy outcome.

Each time a change was made to our source control repository, a fresh build of the browser was created and run against a suite of automated tests that measure the performance of the build. These results are then compared against the results of prior builds, allowing the team to track improvements and regressions.

One such test that was used is called TART, short for Tab Animation Regression Test. The test works by opening and closing tabs and measuring the amount of time needed to paint each frame of the animation. Normally Firefox only attempts to paint one frame every 16ms (equivalent to 60fps) but during TART that limit is disabled.

Users of Firefox can have infinite variations of hardware setup, some of which are much slower than our testing infrastructure. By trying to paint as fast as possible, we can get a number that will represent the maximum bound for our graphics performance on our fixed-setup testing infrastructure. By tracking this number, we project that the full Firefox user-base will on average see proportional performance gains.

Now to the numbers 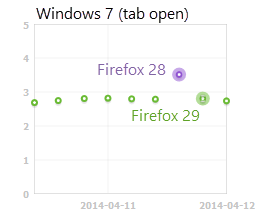 In the previous version of Firefox on Windows 7, Firefox took an average of 3.52ms to paint each frame of the tab opening animation [1]. With the new version of Firefox, we have gotten this number down to 2.81ms, which is a 20% speed up!

Gains like the above only happen when a solid testing framework is in place and an equally solid team keeps performance as a top priority. Cheers to everyone that has helped make the new release of Firefox the fastest yet.

[Update: Thank you to Benedikt who in the comments below corrected a math error that I made with the percentage of improvements]

§ 4 Responses to The fresh and furiously fast Firefox

You are currently reading The fresh and furiously fast Firefox at JAWS.